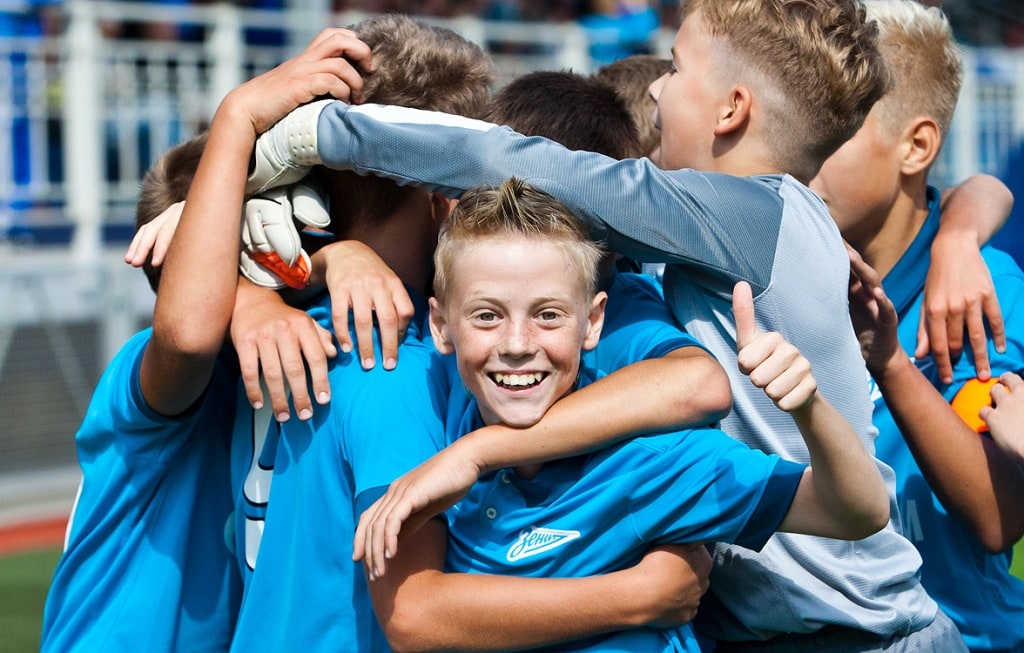 At the top of the Zenit Academy educational idea is the principle of training the player, not the team.

All Academy teams play on a  tactical scheme and its variations.

Training sessions at the Academy are divided into three types:

1. Technical and tactical training
Technical and tactical training in the Academy can be divided into the following types:
Group training
In group training the players work with two coaches. Group training session lasts around 75–80 minutes. It consists of three parts, a , the main session and a final part. The main focus of the group exercises are aimed at practicing team interactions during the game (attacking, defensive and moving from defence to attack.) Working on technique is conducted during group exercises.
Special training
During special training the team work with between four and six Academy coaches. Typically, a group of 18 players are divided into 4–5 groups, they practice ball skills, passing, receiving the ball, heading, crossing from the flank, deceptive movements, two on one play, three on two and other skills. Working in small groups allows the players to pay more attention to the coaches.

2. Theoretical and psychological training
Theoretical and psychological studies at the Academy can be divided into the following types:
Tactical training on the field
During these training sessions the players take their in game positions and perform certain movements (with and without resistance,) that are required during the game. We divide these movements into four types: defensive, attacking, the transition from defence to attack, and in the transition from attack to defence. Sometimes coaches work with individuals or groups. These training sessions also include learning the standard position for and corners, both in attack and in defence.
Tactical training in the hall for theoretical studies
In addition to tactical training on the pitch we also hold sessions with the teams in theoretical studies. They can be divided into three types:
Preparation for the game;
Analysis of the game;
Theory sessions.
During preparation, the players use the theoretical studies room and the whole team and coaches discuss the strategy for the selected the game. They use a projector, screen, magnetic board, flip chart and other equipment. The coaches show the players how to correct common mistakes and as a group they discuss how it would be possible to avoid errors, and train in the best way possible during the week to prepare for the next game.
Individual conversations with the players
The academy coaches regularly conduct individual sessions with the players. As a rule, such discussions are held on the day after the game or the day before the game. The coaches look out for the welfare of the young players and do what they can to prepare the player for life as a professional athlete.

3. Physical training
Classes in physical education at the Academy can be divided into the following types:
Physical training in the gym
Classes are held in the gym on an individual basis. The coaches prepare a physical preparation program for players who want to build muscle mass, or who are undergoing rehabilitation after injuries and monitors their progress. Sometimes there are also group sessions, but these are not standard.
Training aimed at improving coordination and mobility
Training for fitness is an integral part of the weekly training schedule. The players and coaches use barriers, poles and lots of equipment to assist them.
Training, which combines work with the ball and improving physical condition
During this training, exercises are performed with a ball at a high level of intensity and last for fixed periods of time. This allows them to work on improving their overall physical fitness and the ability to be explosive with intense endurance and assist the body’s ability to recover quickly after physical exertion.