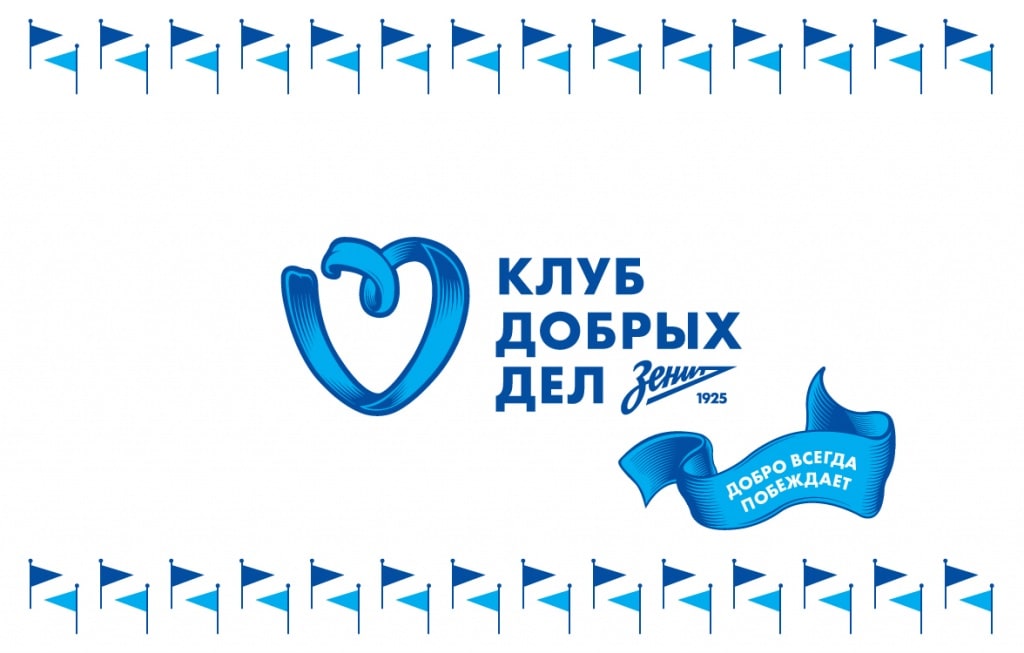 A social project from Zenit, uniting all of Zenit, the players of all our teams - the first team, the youth side, Zenit-2, the basketball team, as well as ex-players, the Student League, fan clubs and our fans.

CGD - is a series of very different activities, sporting, educational, social and charitable. From large-scale exhibitions to small acts, a good deed is open to any good and useful initiative.

Devote their good work and you can - this tell us about it in social networks using the hashtag  # klubdobryhdel , and we will share your story with all who support the "Zenith".

"Club Good Deeds is the continuation of the charity marathon 90 Good Deeds, which took place throughout 2015 and was dedicated to the anniversary of the club. Over those 365 days the blue-white-sky blues carried out a variety of activities/.

1. Fans from Severodvinsk visited the training team
on the 26th February at the Gazprom training centre, the blue-white-sky blues hosted their first guests. The fans, who came especially from the Arkhangelsk region for a Russian Cup match, were able to see how team trained and after had a chance to meet with the players and coaches.

2. Children from an orphanage held a training session at the Gazprom academy
The blue-white-sky blues and the program Name Day from Channel Five arranged for the children from the orphanage to tour the club and the academy and get involved in training with the U-11 team.

3. Students from gymnasium № 2 visited the team training
The blue-white-sky blues Gazprom training centre received regular visitors. Young fans who have repeatedly supported Zenit at the Petrovsky stadium come to see how the team train, followed by a meeting with players and coaches.

4. The winners of the library contest saw Zenit training
The authors of the best congratulations to the club on Zenit’s anniversary were able to see how the team prepared for the meeting with Krylia Sovietov. In 2015, in honour of the 90th anniversary of Zenit, a traveling exhibition visited the city’s children's libraries in all districts of St. Petersburg. In parallel with this exhibition, we held a contest of children's drawings congratulating the club. One of the prizes for the winners of the contest was the visit to the Gazprom training centre. Young fans watched the team workout, followed by a meeting with the players and coaches.

6. The Student League supports Zenit in the Petrovsky
Over two hundred representatives of the student blue-white-sky blue fan clubs went to one of the most important matches this April.

7. The coaching staff and players of Zenit basketball team had special training for students at the home arena

8. Mikhail Kerzhakov read The Little Prince to young patients in hospital
On 6th April the blue-white-sky blue goalkeeper went to the Institute of Pediatric Hematology and Transplantation, where he met the young patients of the hospital.

10. Sergei Semak played football with children from orphanage № 3
On the 12th April the coach of the blue-white-sky blue was a guest at the children from the orphanage number 3 and held with pupils activity on the football field.

11. A visit from Belgium once again at Zenit
Jan Krupa came and visited us for the second time and meet with Nicolas Lombaerts, Axel Witsel and other players from the blue-white-sky blues.

12. The players of Zenit-2 conducted a master class for children's tournament participants
The blue-white-sky blue midfielder, Yuri Bavin and defender Andrei Vasilyev visited the Grassroots Festival, where they held a training session with young footballers.

All the news
×
Do you want to be the first to know the news “Zenit Tickets and Subscriptions”?
By subscribing, you agree to receive the newsletter